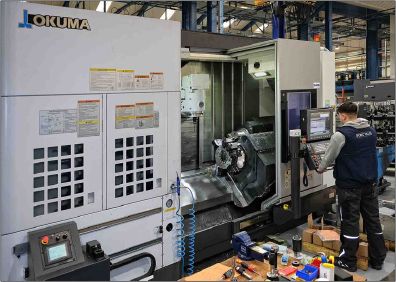 Two modes of Turning plus Prismatic Machining in one hit replaces four ops in Valve Production.

Fort Vale Engineering, Burnley, is a global leader in the manufacture of stainless steel valves and ancillaries used in the tank container industry for transportation of bulk liquids and gases by road, rail and sea. The company had been making one particular type of valve for several years in four sequential operations on lathes and machining centres in a lead-time of 24 hours.

To speed throughput and raise profitability, the manufacturer was keen to find a production solution that would see a billet enter a machining platform and a finished component emerge after a much shorter time. Considerable research and trials led to the discovery of the ideal process, which takes just eight hours.

It required the purchase of a Japanese-built Okuma Multus U4000 multi-tasking turn-mill centre with a B-axis milling spindle, lower turret and twin-opposed work spindles from sole UK agent NCMT. The supplier turnkey-engineered the cell with Turn-Cut (interpolation turning) software in the control and a chip reader to keep track of tools on the shop floor. NCMT also wrote the program and ran off sample components to prove out the process.

To manufacture this product in one hit, we needed a turn-mill centre with a long Y-axis movement. This prerequisite was satisfied by the 300 mm Y-axis on the relatively compact U4000, saving us having to buy an unnecessarily large and expensive machine.

However, the most notable attribute of the production centre is Okuma’s Turn-Cut software in the proprietary OSP control. It allows one port in the valve to be machined to an accuracy of plus 25 microns, minus nothing by exploiting a second mode of turning – interpolation turning – using the milling spindle and a boring bar with a Sandvik CoroTurn carbide insert.

It was essential in getting the part off complete after one clamping without the expense of sourcing special ground form tools, which can take a long time to arrive, would elongate the cutting cycle and produce an inferior finish.

Turn-Cut functionality was originally introduced by Okuma on its horizontal machining centres (also utilised in the Burnley factory) and was then integrated into its multi-tasking lathes and 5 axis machining centres a few years ago. The operation involves rotating a turning tool in the milling spindle through 360 degrees in a given time period and at the same time advancing the tool to machine the intended feature.

This is achieved by circular-interpolating, in the identical timeframe, the linear axes controlling the movement of the motor spindle, enabling the programmed profile to be generated. It is a curved bore in the case of the Fort Vale valve. Had the decision been taken to replace the turning tool with a rotating milling cutter and machine the bore in that way, the surface finish would have been unacceptably degraded.

Mr Maher explained that other multi-tasking lathe manufacturers also offer interpolation turning in addition to conventional turning, but the equivalent features take longer to program as well as to execute within a cutting cycle.

He advised that the big difference with Okuma is that it manufactures in-house virtually every component part of its machines, notably the control, drives, encoders and scales, which means that they inter-communicate seamlessly and quickly. Interpolation turning is invariably slower and more cumbersome on other makes of machine tool, as most are built using third-party products for control, actuation and feedback of axis positions.

Advantages of producing Fort Vale’s stainless steel valve in one visit to the U4000, apart from a three-fold lowering of lead-time, are reductions in manual handling and work-in-progress on the shop floor. Additionally, while there was never previously any question of machined valves having features outside drawing tolerance, accuracy is much easier to achieve now that the part is not repeatedly reclamped. Absence of tolerance build-up also allows more flexibility in selection of cutting parameters, reducing cycle time further.

Fort Vale was no stranger to Okuma Multus machines from NCMT, having purchased a Multus B300C, an alternative iteration of the B-axis production centre a decade ago. The valve manufacturer currently operates nine machining centres and lathes from the same source, accounting for about one-quarter of the machine tools on the shop floor. However, production staff in Burnley always review the wider market every time they make a major investment and visit all the major exhibitions to reassure themselves they are buying the best quality and technology for each intended application.

With the original Multus, Fort Vale purchased a Zoller tool presetter and tool identification equipment from Balluff. When a tool arrives in the lathe’s magazine, its data is already written onto a chip on the cutter body. As the tool is exchanged into the motor spindle, the data is extracted by a Balluff reader in the work area so the control knows immediately the presets and remaining cutter life. Risk of operator error through manual intervention is thus eliminated.

Similar Balluff read/write equipment was ordered with the new Multus. The setter-operators are able to interrogate Zoller’s warehousing software to find out where any given tool is located – in the tool magazine of one or other of the multi-tasking machines, or in external storage. NCMT added the request for an interface to the build order sent to Japan and was instrumental in fitting the equipment on the shop floor in Burnley. In the process, the supplier adapted the software so that the chip includes data as to which of the two 40-position tool magazines in the latest Multus any given tool resides.

Two views of the Okuma Multus U4000 on the shop floor at Fort Vale Engineering, Burnley.

Stephen Maher, process improvement engineer at the Burnley factory, demonstrating the Balluff equipment. After data has been written to a chip on the toolholder, the cutter is placed in one of two 40-station magazines in the latest Multus. The data is subsequently transferred to the control by a reader in the working area of the lathe after tool exchange.

This 2-inch gas foot valve, machined by Fort Vale from stainless steel in the Multus U4000, includes a Turn-Cut port (shown centre left). It is not the component for which the machine was originally purchased, but one of approximately 30 components now produced in the cell.

We use cookies on our website to give you the most relevant experience by remembering your preferences and repeat visits. By clicking “Accept All”, you consent to the use of ALL the cookies. However, you may visit "Cookie Settings" to provide controlled consent.
Cookie SettingsAccept All
Manage consent

This website uses cookies to improve your experience while you navigate through the website. Out of these, the cookies categorised as necessary are stored on your browser as they are essential for the working of basic functionalities of the website. In addition, we also use third-party cookies that help us analyse and understand how you use this website. These cookies will be stored in your browser only with your consent. You also have the option to opt out of these cookies. But opting out of some of these cookies may affect your browsing experience.
Necessary Always Enabled
Necessary cookies are absolutely essential for the website to function properly. These cookies ensure basic functionalities and security features of the website, anonymously.
Functional
Functional cookies help to perform certain functionalities like sharing the content of the website on social media platforms, collect feedbacks, and other third-party features.
Performance
Performance cookies are used to understand and analyze the key performance indexes of the website which helps in delivering a better user experience for the visitors.
Analytics
Analytical cookies are used to understand how visitors interact with the website. These cookies help provide information on metrics the number of visitors, bounce rate, traffic source, etc.
Advertisement
Advertisement cookies are used to provide visitors with relevant ads and marketing campaigns. These cookies track visitors across websites and collect information to provide customized ads.
Others
Other uncategorized cookies are those that are being analyzed and have not been classified into a category as yet.
SAVE & ACCEPT