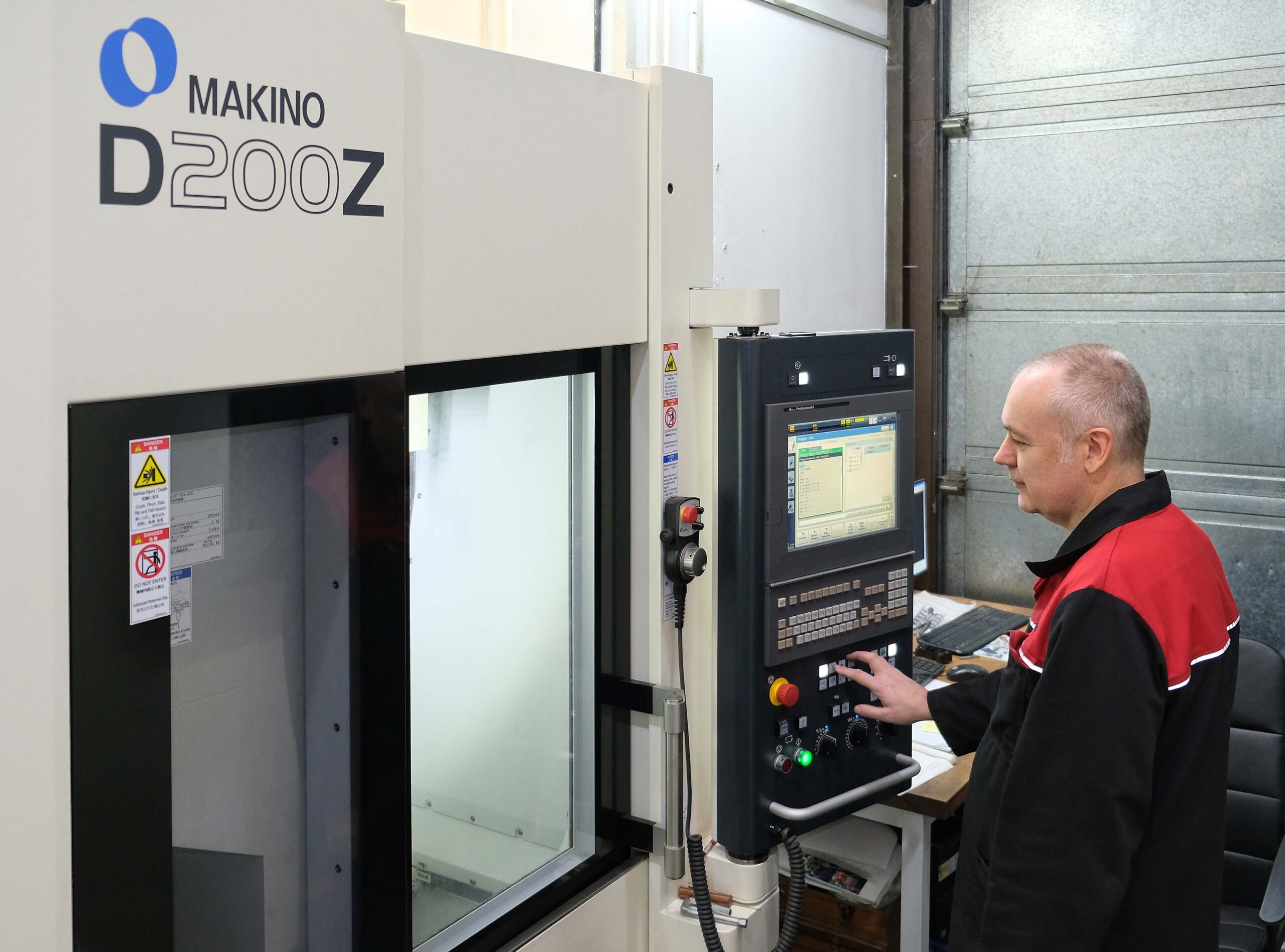 Whitchurch toolmaker and plastic injection moulding specialist BM Injection has over the years replaced more and more time-consuming electric discharge machining (EDM) of moulds and dies with direct milling of the tool steels in their hardened state, which can be up to 58 Rc in the case of 2083 used for injection moulding highly abrasive thermoset plastics.

Until recently, hard milling was the job a 3-axis, vertical-spindle machining centre (VMC), while the only 5-axis model on site was reserved for light mould finishing and for machining complex, mostly graphite electrodes for sparking cavities.

In early 2019, the company invested in a second 5-axis VMC, a Japanese-built Makino D200Z supplied by UK agent NCMT (www.ncmt.co.uk), for rough and finish milling of tool steels to single-figure micron accuracy. Machining is now carried out in one hit, including complete milling of the gate, whereas at least two operations were previously needed, or else three if a route involving milling plus electrode production and EDM was chosen. Consequently fewer skilled operators are now needed, cutting production costs and alleviating the problem of recruiting experienced staff.

Machining in one clamping by automatically repositioning the workpiece in-cycle using the two rotary axes brings higher accuracy by eliminating tolerance build-up. The Makino has internal sensors and strategic cooling of the spindle, ballscrews and machine structure that allow phenomenally high precision to be held in the Whitchurch factory, even though it is not temperature controlled. Directors Tim Combes and his son Mark pointed to a 54 Rc Stavax test piece machined by Makino under controlled conditions in its test laboratory in Japan to 2 µm total tolerance, commenting that double that is achievable on BM Injection’s shop floor.

“Surface finish is also important. A mould that takes 20 hours to hand polish if it is produced on a sparker can, after direct milling, be finished in three to four hours on the Makino, which is an enormous labour cost saving. Lead-time from order to completion has been cut by an average of 40 per cent.”

Mark advised, “In the case of side-action mould tools, we previously needed to grind them prior to die sinking to achieve the required finish. Now nothing needs grinding and the moulds are finished in one set-up on the D200Z.

“Also, as the machine’s high volumetric accuracy leads to less hand polishing of cavities, it is easier to hold the true shape of the mould and die because less material is being removed. This is especially important when making tools for the production of lenses and other optics.”

Apart from the Makino machine’s ability to hold very high accuracy over its entire 350 x 300 x 250 mm working volume, another reason for its selection was the small footprint of approximately 2.75 x 3.75 metres, which is important as space is limited in the Whitchurch facility. Other features of the machine include a B-axis with 180 degrees of tilt at 100 rpm, a 150 rpm table C-axis, a 30,000 rpm HSK-E50 spindle and cutting feed rate up to 60 m/min.

We use cookies on our website to give you the most relevant experience by remembering your preferences and repeat visits. By clicking “Accept All”, you consent to the use of ALL the cookies. However, you may visit "Cookie Settings" to provide controlled consent.
Cookie SettingsAccept All
Manage consent

This website uses cookies to improve your experience while you navigate through the website. Out of these, the cookies categorised as necessary are stored on your browser as they are essential for the working of basic functionalities of the website. In addition, we also use third-party cookies that help us analyse and understand how you use this website. These cookies will be stored in your browser only with your consent. You also have the option to opt out of these cookies. But opting out of some of these cookies may affect your browsing experience.
Necessary Always Enabled
Necessary cookies are absolutely essential for the website to function properly. These cookies ensure basic functionalities and security features of the website, anonymously.
Functional
Functional cookies help to perform certain functionalities like sharing the content of the website on social media platforms, collect feedbacks, and other third-party features.
Performance
Performance cookies are used to understand and analyze the key performance indexes of the website which helps in delivering a better user experience for the visitors.
Analytics
Analytical cookies are used to understand how visitors interact with the website. These cookies help provide information on metrics the number of visitors, bounce rate, traffic source, etc.
Advertisement
Advertisement cookies are used to provide visitors with relevant ads and marketing campaigns. These cookies track visitors across websites and collect information to provide customized ads.
Others
Other uncategorized cookies are those that are being analyzed and have not been classified into a category as yet.
SAVE & ACCEPT